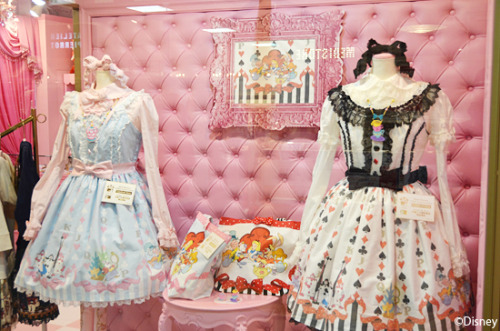 Angelic Pretty has done quite a few collaborations with Disney thru the years and I wanted to make this post to show you some of them! The most popular motif has been Alice in wonderland but there has also been some with Minnie Mouse, Daisy Duck and Disney princesses. 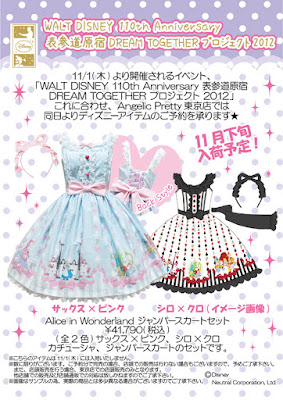 2012 Angelic Pretty released this print for the 110th Disney Anniversary. I really love Alice in wonderland and its pretty cute that they used the characters so straight off but I wish that they would of done something more with the boarder print, I feel like the characters are really just slapped on there because there is nothing to frame them in. I think there just could of been more details, like have a bit more fun with it. The cut is very simple for the pricetag, it looks like special set/lucky pack quality. The sax colorway is really cute, I like the pink detailing. The white colorway just looks really cheap, I think its the black lace on a white dress that is the worst. Its really a too simple and plain print to work in a white colorway, I think red could of been better. 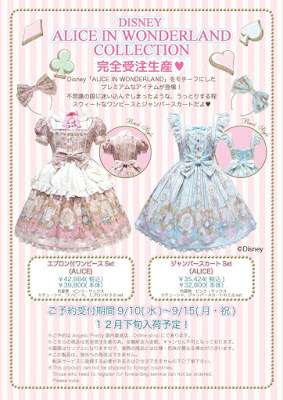 This is an other Alice in wonderland dress that they released. I think this one is much better. It looks more like a typical Angelic Pretty dress, it has the details that the other one lacked and the colors are more subtle. It has a nice boarder in a good scale to the rest of dress. The cuts are really cute too, I would probably take off the apron though. The sax color feels the cutest because it looks more like a Alice dress. All in all super cute. 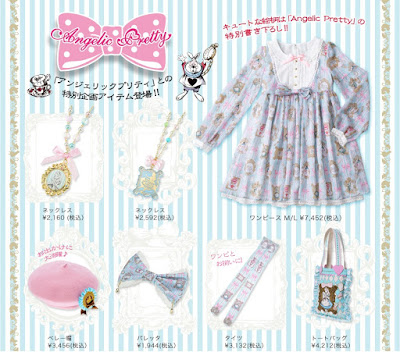 They also made this cute dress, its a pretty simple cut without a boarder print. I think the whole set would be cute together. The beret is really cute too. It's a simple dress but it is also is much cheaper than other lolita dresses!

I love this cute collection with Minnie and Daisy, the illustrations are so amazing and they did a great job making that unicorn illustration into a plush bag. I have that unicorn bag and I love it, makes any outfit more cute! I love AP doing more casual things in collabs is cool too. I would love the backpack. 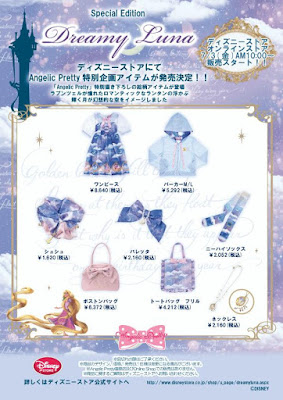 They also made a special set of things with Rapunzel from the movie Tangled, the print is called dreamy luna! It has pictures of  Rapunzel and the rest of the print is a sky with clouds and the floating lights from the movie. I really like this set, its like an other version of dream sky. 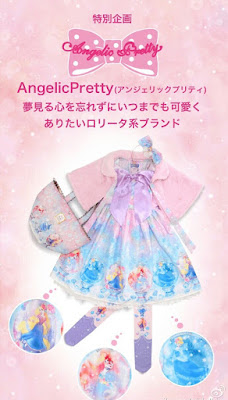 They also made this really pretty dress with classic disney princesses, I love all the colors in the print and it looks really magical, the tote and cape are not so interesting but the dress is just super cute. It really just goes together, the ribbon in the front is cute too.

I think its really fun when different brands make collaborations because it can bring out the best of two worlds. I hope they do more in the future! Since I love both Angelic Pretty and Disney. ~