I posted about this dress a few weeks ago and thought it looked cute so I'm happy I can see it properly now! I think this is really cute and goes with the season.

Print
This is really a Christmas print, which is nice in December but can feel out of place the rest of the year. It reminds me a lot of toy march and holy night story, I feel like if you have one Christmas print why do you even need an other one? I think its funny that they got the plushes pants in this one, people commented a lot on the lack of pants on toy march.They are cute and all but I think they look dead inside. I think the print over the boarder is really lazy, its pretty boring and I think the scale should of been bigger because the scale of the boarder is pretty big. The colorways are pretty nice though.

The cuts
I think they are okay, they could be better. The op is pretty cute but that type of op doesn't leave much room for creative coording. The marching band style top is cute on the op but I don't like the weird line down the middle on the jsk. also the part on the hip on the jsk is just kinda weird. The top would be better in the style of holy night story. I don't really like the salopette, its in that weird not full length and still not casually short. And the print looks like it barely fits on there. 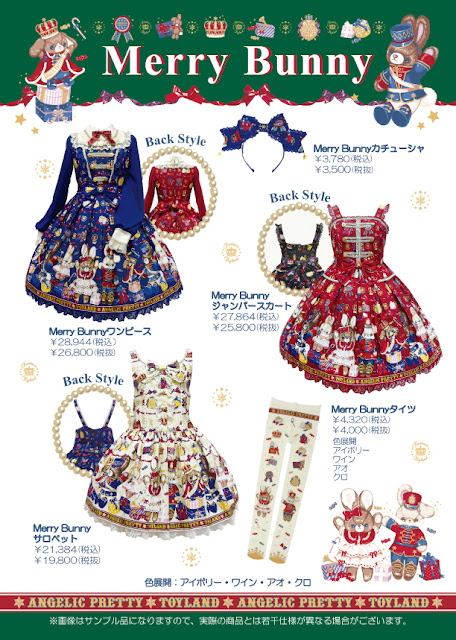 I think its kinda okay, there are many older Christmas prints that I would rather have. So I give this print a 2/5 cookie hearts