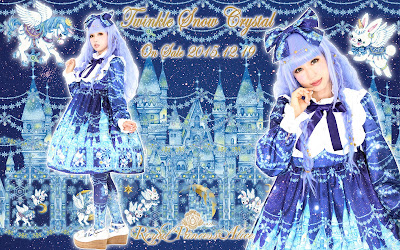 Royal Princess Alice has a new print called Twinkle Snow Carnival. I think it looks like a boring winter version of Castle Mirage. The characters on the print look so tacked on since they are in a compleatly different style than the rest of the print and I feel like there is something off with them. I think the whole print would of been better without them altogether if they are not going to match the style of the castle. The name of the brand in the print looks so pasted on there that I looked at different pictures to be sure that it was actually on the print and not just on these pictures. The scale if way too big for the cut since it barely fits onto the dress. The part above the boarder is really really boring, they could of just had it be a night sky with snowflakes falling down and it would of looked much better. I wish they would at least have a more interesting cut, this just leaves no room for coording it creatively. I'm not really impressed.